by polar
I usually don't ask questions about a particular route (ie. never), because there's usually enough TRs and forum threads out there to help figure everything out. However, I'm pretty confused by a single photo (below) that appeared in two different TRs written by people who climbed the route together. 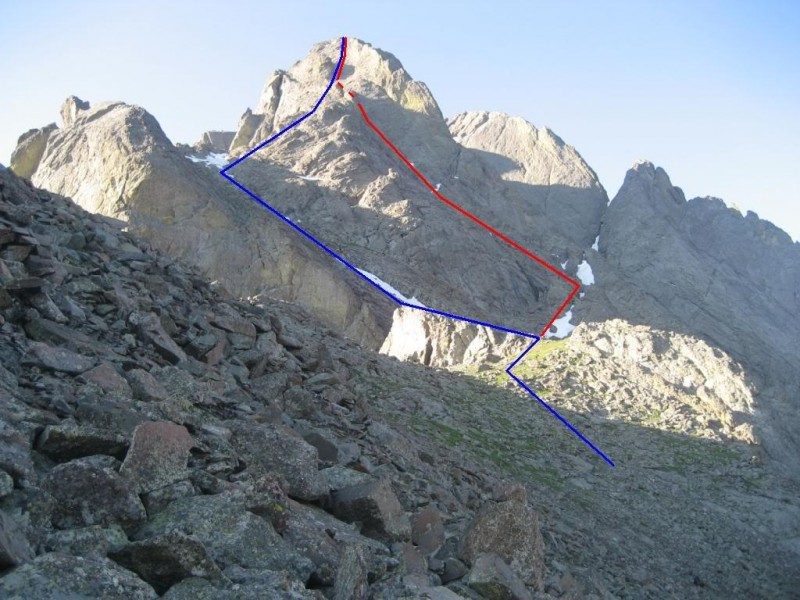 I borrowed following picture from maverick_manley. According to him, we should be on the blue line, but we're on the red line. If you're going now, just make sure to stay at the blue line as much as possible.

The actual route should be in blue, but we're ended up on RED.... the so called NORTH PILLAR

Joe marked out the routes on many of the pictures that follow (Thanks, man). The blue line marks the route we took and red marks the NW Buttress route that looks more fun, in retrospect.

I nicked this picture from Mountain Project. It looks like I remember the route to be, although I think our path at the bottom curved to the left as you view it in the pic.

by Boggy B
The topo on MP didn't look right to me. We stayed basically on the ridge according to my GPS tracks.

by Conor
somewhere between the cyan line from broken knee and the red line polar posted. It's pretty intuitive and basically rock hopping until the very top where everything sort of comes together.


I agree, the photo on MP seems off. But it’s not the first time I found the beta on MP to be incorrect. In case anyone in the future look at this thread and wonder what came out of it, I drew the route we took on north buttress.

by Marmot72
This route has puzzled me at intervals ever since I did it in 2007 and then joined this site. When I attempted it, the next hardest thing I had tried was Wetterhorn, and my only references were Roach and Dawson. I am pretty sure I took the red line. The thing that baffles me is the supposed down climb from the false summit to the real one. I recall looking down a narrow red gully off the north side as clearly as if it happened last week, but all of the down climb pictures I've seen to reach this point seem way steeper and exposed than I recall.
All times are UTC-06:00
Page 1 of 1